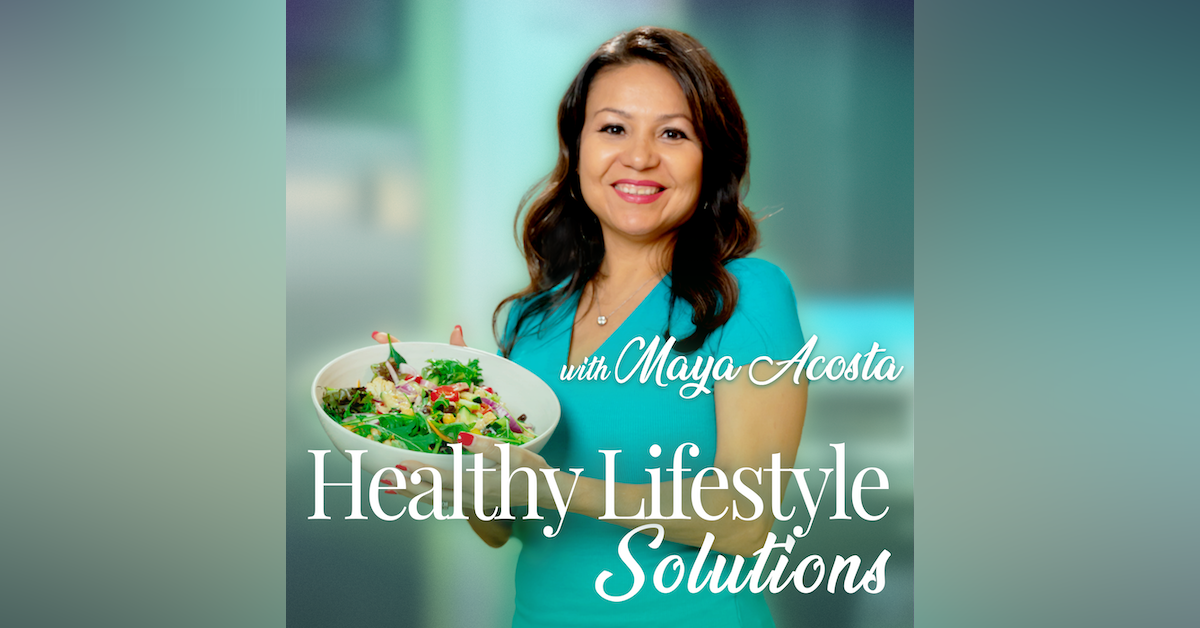 229: A Lifestyle Medicine Approach to Overall Physical and Mental Health with Maya Acosta

In honor of National Suicide Prevention Awareness Month in September, we'll discuss depression and lifestyle medicine's role in improving our general health in today's episode. Join us in spreading awareness about mental heal...

Key takeaways to listen for

Resources mentioned in this episode

While this topic can be challenging, I feel it is essential to discuss what we can do to reduce our risk of developing depression.

Nearly forty thousand Americans take their own lives each year, and depression is a leading cause. You or someone you know may either suffer from depression or have attempted self-harm.

I want to encourage you to see if lifestyle interventions can help improve your mood and overall physical and mental health.

Here are some warning signs:

If you are experiencing these symptoms, know that you can Call 1-800-273-8255 to reach the National Suicide Prevention Lifeline

24 hours a day, seven days a week, and follow their guidance.

"Major depression is one of the most commonly diagnosed mental illnesses. An estimated 7 percent of American adults suffer from serious depression- about sixteen million people with at least one depressive episode each year."

Recently, I interviewed an expert in the field of "positive psychology," which focuses on the relationship between optimal mental and physical health. Dr. Liana Lianov will explain the reciprocal loop between positive emotions and healthy lifestyle habits. Her episode will air in 2 weeks.

We know that happier people tend to eat healthier and exercise more. Dr. Lianov explained how this reciprocal loop works. Since we tend to be driven by our emotions, we want to focus on improving our moods by exercising and eating whole plant-based foods. Enhancing our attitudes includes journaling, reminiscing, and random acts of kindness. By raising our happiness levels, we are more likely to develop healthier habits leading to improved mental and physical health.

One of those healthy habits can be eating a whole food plant-based diet to improve your mood.

Let's look at how foods can affect our mental health.

A team of researchers gathered subjects who consumed meat at least once daily. They wanted to see if the subjects' moods improved if the diet omitted these products. Within two weeks, there was a significant mood improvement.

Researchers concluded that perhaps consuming a diet with less meat can help protect omnivores and others who are more susceptible to affective disorders such as depression.

Another study involved researchers gathering individuals in their workplace setting. The subjects were either overweight or diabetic. The participants were encouraged to consume a primarily plant-based diet while cutting out meats, eggs, dairy, oils, and processed foods.

The program did not include calorie counting or portion control. Participants were not even encouraged to change their exercise routine.

The control group did not receive any dietary advice.

Over five months, those who consumed a predominantly plant-based diet saw improved digestion, increased energy, slept better, and had enhanced well-being compared to the control group. Their better sense of well-being increased their work productivity.

Today we know that plant-based foods improve our mental health. "A review in the journal of Nutritional Neuroscience concluded that, in general, eating lots of fruits and veggies may present "a non-invasive, natural, and inexpensive therapeutic means to support a healthy brain." Higher consumption of vegetables may cut the odds of developing depression by as much as 62 percent.

I will briefly explain the monoamine theory, which addresses the chemical imbalances leading to depression.

People suffering from depression tend to have high levels of this monoamine oxidase enzyme. Low levels of the monoamine neurotransmitters serotonin and dopamine thus contribute to depression.

What if we could find foods that help support optimal levels of the neurotransmitters containing serotonin and dopamine? Certain plant-based foods help inhibit the enzyme that can break down our serotonin and dopamine. Plant-based foods such as apples, berries, grapes, onion, and green tea contain phytonutrients that naturally inhibit MAO - they are natural antidepressants. Perhaps this explains why eating a predominantly plant-based diet can lower rates of depression.

There's another way that you can help boost your serotonin levels without requiring supplements. While this happiness hormone cannot cross the blood-brain barrier, the precursor tryptophan can. Tryptophan is an amino acid found in milk, canned tuna, turkey, chicken, and cheese. However, we need not rely on animal-based foods to get our tryptophan dose.

Plant-based sources of tryptophan include nuts and seeds, oats, bananas, and other fruit. A carbohydrate-rich breakfast can help move non-tryptophan amino acids out of the bloodstream and into the muscle allowing tryptophan greater access to the brain.

In a year-long randomized study, 100 men and women consumed either a low-carb or high-carb diet. Results showed that the subjects who consumed a high-carb diet experienced significantly less depression, hostility, and mood disturbances.

The ideal breakfast (a carb-rich breakfast) would be oats with bananas, berries, and flaxseeds to help boost our energy and mood. I've noticed that I feel calmer when I have such a breakfast as opposed to skipping that first important meal of the day.

Since we are still on the topic of nutrition, I want to mention aspartame and its effects on our mental health. Many people still prefer to use aspartame in place of refined sugar.

Researchers took a group of healthy individuals and divided them into two groups. One group received a higher dose of aspartame. The other half received a lower amount. Then the groups switched their dosage. After eight days, the participants that received a higher aspartame dose were irritable, exhibited more depression, and performed worse on brain function tests.

Conclusion? Aspartame may cause adverse mental effects in sensitive individuals and the general population.

Aspartame is in soft drinks, cereals, gums, jams, jellies, nutrition bars, and yogurts. Make sure to read labels and avoid aspartame as much as possible. I recall one-day browsing at products as I was paying for my groceries. I saw a box of breath mints that looked enticing. I was shocked to see aspartame was one of the ingredients.

Studies have shown that the more fruits and vegetables you consume daily, the happier, calmer, and more energetic you will feel. I can testify that when I cleaned up my diet and ate an entirely whole food plant-based diet, I naturally felt calmer. People often ask me what health improvements I noticed after making these dietary changes.  First, I point out that my acne struggles have finally ended. Next, I point out that I have an overall sense of well-being. I feel calmer.

Finally, you can make other lifestyle changes to enhance your mood.

Exercise and walk those blues away. Physically active people tend to have fewer depression symptoms.

Researchers from Duke University randomized a group of men and women who suffer from depression. While some subjects took antidepressants, others participated in an aerobic exercise program. Four months later, both groups reported significant mood improvements. It turns out exercise was just as effective as antidepressants.

Get plenty of sleep. Dr. Cindy Geyer came on the show to speak to us about the importance of sleep. Certain conditions, such as sleep apnea, restless legs syndrome, and insomnia, can affect our quality and quantity of sleep. Sleep deprivation can lead to irritability, anxiety, and depression.

You can visit episode 168 to learn more about sleep.

Often people who suffer from depression may self-medicate. My recent guest Janet Gourand showed us how to put down the glass and take back control. Her online support group teaches members how to thrive in life. 225

Again, Dr. Liana Lianov will be on in a couple of weeks to discuss positive psychology so that we can thrive in life.

Finally, many other things can contribute to depression that may require counseling and medication. Do not be afraid to seek help.

If you are experiencing these symptoms, know that you can

24 hours a day, seven days a week, and follow their guidance.

I hope you found this episode to be helpful.

Email has been submitted.